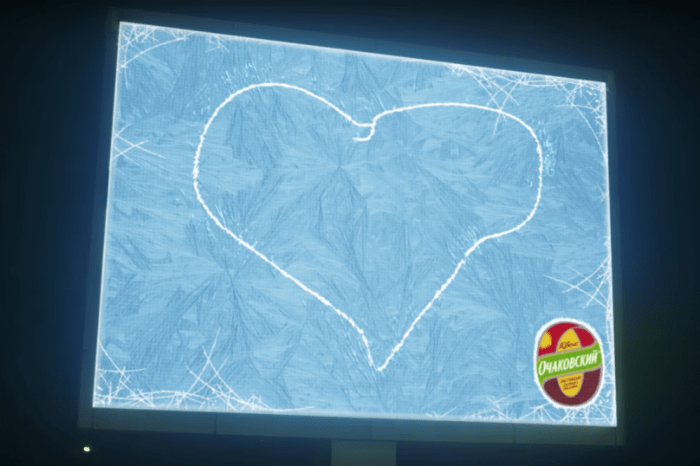 The campaign, which took place in Sokolniki Park (in central Moscow), used Quuppa real-time location system (RTLS) hardware, as well as software from New York-based navigation technology company Navigine and software-development firm Mobecan. The deployment, created for Great Advertising Group, was intended to be a fun marketing event for Ochakovo beer that would increase brand recognition by sharing content via social-media networks and YouTube.

Navigine is currently in discussions with a New York City park, as well as several U.S. brands and technology providers, to launch a similar advertising campaign in the United States as soon as later this month. Navigine is a three-year-old company that offers indoor and outdoor location solutions. "For that, we can use Bluetooth Low Energy (BLE) beacons and ultra-wideband technology, as well as GPS," says Oleg Demidov, Navigine's chief business-development officer. Following research and development work conducted in Moscow, the company opened an office in New York this year to sell its technology. The solution deployed in Sokolniki Park utilized Quuppa's BLE Locators (receivers) and tags (Bluetooth beacons) on skates.

For that installation, Navigine attached Quuppa's Intelligent Locating System tags, which function as Bluetooth beacons, to the soles of skates rented out by the park, according to Alexey Panyov, Navigine's CEO. A total of 50 pairs of skates were tagged in this way, with a single tag attached to one skate in each pair. The sides of the tagged pairs bore a logo for the Ochakovo brand. Around the perimeter of the 50,000-square-foot rink, Navigine installed four Quuppa Locators, which receive the tags' signals and are used to measure the angle of the received transmissions in order to pinpoint the skaters' locations.

Mobecan provided a dedicated server on which its software, along with Navigine's software, managed the collected read data. Locator data was forwarded to that server, and the Navigine software determined each skater's location, while Mobecan provided the image that tracked his or her movements in real time. The system displayed that image on a large video screen mounted next to the rink. When a skater received a pair of tagged skates, the footwear's tag ID number was linked with the telephone number of that person's smartphone in the Mobecan software. She could use her phone's browser to visit a website to view an image representing the skating rink, as well as her position on the rink, as determined by location data culled from the Quuppa Locators. That location data needed to be accurate to within about 2 feet in order to create the picture, Panyov explains. As the individual began skating, the system continued to collect location data, and the path that she followed was displayed in the form of a red line, thereby enabling her to draw a picture or words with her skates. The skater could use her smartphone to erase pictures, stop transmission while changing her location on the rink or cease creating the image.

Once the skater was finished with her drawing, she could post the image on Facebook, or on Vkontakte, a European social-media network. The image of her drawing also included the Ochakovo beer logo and could be displayed on the rink's large video screen. Skaters could opt to have their drawings displayed on the screen in real time, even while they were still in the process of skating. In that way, they and park visitors could watch the drawing in action. 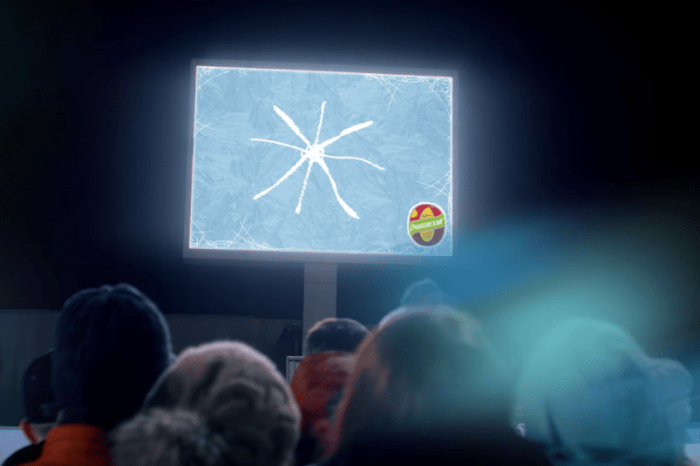 During the two-week campaign, Panyov reports, hundreds of individuals used the system, about 50 of whom shared their drawings on social media. However, the main source of advertising was YouTube. Great Advertising took a video of the system in use by a variety of users, and posted the result on YouTube, where it that has garnered more than one million hits to date.

At present, Panyov says, Navigine is in discussions with Great Advertising about launching similar ad campaigns for other brands. In the meantime, Navigine is meeting with several advertising companies, brands and retailers, as well as technology providers, regarding U.S.-based solutions. In addition to the unnamed New York City park, for which several brands are considering advertising, some retailers and shopping malls are contemplating using the technology to bring content to shoppers based on their location, he adds. The system was installed within a very short timeframe, and had to be robust enough to operate in Moscow's notoriously cold weather. Panyov says the company sought hardware that could operate under windy, snowy and frigid conditions, with temperatures around -30 degrees Celsius (-22 degrees Fahrenheit).

Navigine's engineers took a train to Quuppa's facility in Helsinki and picked up the beacon tags and Locators, then installed the hardware themselves. "We try to make tools for easy deployment," explains Fabio Belloni, one of Quuppa's cofounders and the company's chief customer officer. The Navigine's deployment, he says, illustrates how flexible Quuppa's technology can be, making it possible for systems integrators and users to be innovative. "They are using location data to build an experience," he states. "Finally, people are putting themselves out of the box. We think of ourselves as enablers for innovation." According to Belloni, the Quuppa technology can be easily installed. The company's QPE software asks what kind of environment is being used, the number of Locators being deployed and the height of objects being tracked, and enables a user to import a map. The QPE software measures the angles of the beacons' transmissions as received by the Locators, and that information can be forwarded to a systems integrator's own software (for the Ochakovo campaign, that would be Navigine's and Mobecan's software).

06 FEB 2016 · 5 MIN
Read Article
Industries
Technology
News
Company
Book a meeting
Company Blog
This site uses cookies. By continuing to browse the site you are agreeing to our use of cookies. Find out more here
Got It!