What is “The Fourth Industrial Revolution” (or Industry 4.0)? 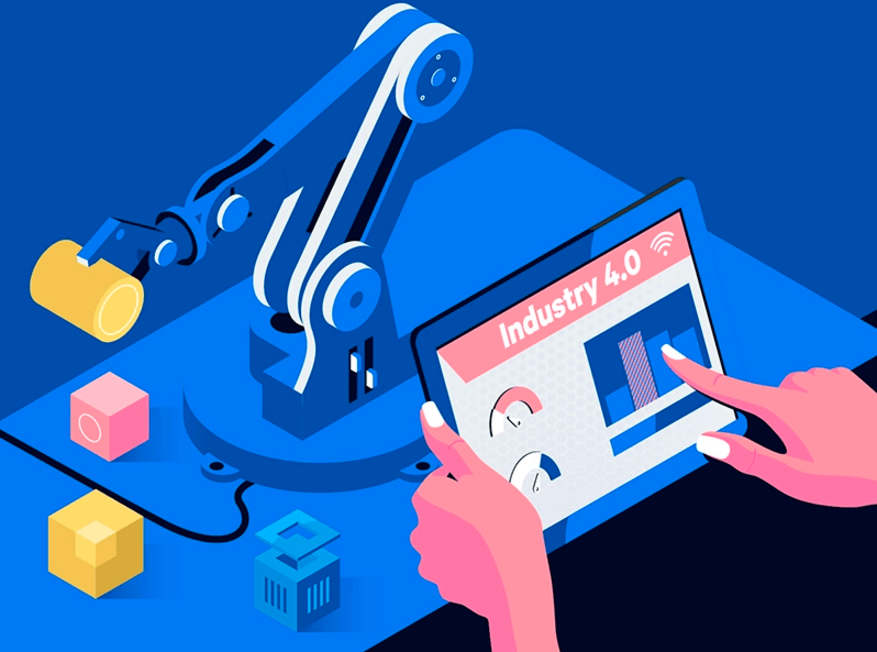 The development of digital technologies significantly influences all spheres of our life. Thanks to them, we have entered the era of the Fourth Industrial Revolution that means a new approach to the organization of work, leisure, and lives of people. Its emergence is connected with the mass distribution of the Internet. The worldwide web has had a major impact on the development of society and has become a prerequisite for creating the modern concept that is called “Industry 4.0 in production”. The concept is based on the transition to automated manufacturing managed by intellectual systems (artificial intelligence) in real-time. In other words, the Fourth Industrial Revolution means the full automation of production processes, which will increase the performance of companies, improve the safety of the staff, and allow companies to create completely new products.

Over the long course of human history, mankind has survived three industrial revolutions that had their peculiar features and results:

Modern Industry 4.0 manufacturing is a growing tandem of technological and industrial innovations. The new concept includes many directions which will result in revolutionary changes both in industry and society in general.

The Internet of Things (IoT) is a concept of data transfer between physical objects. Data exchange can be carried out between sensors, machines, and other devices that can solve tasks without human intervention. In some cases, people can participate in processes, for example, during the implementation of the “smart home” system.

The Industrial Internet of Things (IIoT) is a type of IoT that implies data exchange between the factory or plant equipment. The assets are equipped with controllers and sensors that direct information to the corresponding services of the company. The result of the IIoT platform implementation is the establishment of automated production and increasing the efficiency of managerial solutions.

Virtual reality is a type of world presentation delivered to people via their feelings. The transmission can be carried out using various technical means, such as helmets, glasses, and retinal monitors. While aiming at triggers, these devices open for users interactive content that can be managed in real-time and space.

Every day a great deal of information, which is difficult to analyze using usual software, appears in the world. Scientists create new methods and tools capable of processing terabytes of data. All information is gathered in special places, data centers, where it is promptly analyzed.

Traditional printers are improved all the time and now allow users not only to print documents in hard copy but also perform 3D printing, i.e. create objects based on three-dimensional drawings. Additive manufacturing stimulates the development of Industry 4.0 manufacturing and allows companies to produce more personalized goods.

The Fourth Industrial Revolution has led to the emergence of the notion of “cybersecurity”. The implementation of digitization contributes to the arrival of the Internet a new generation of criminals who can easily get access to people’s personal information. Cybersecurity provides for a set of methods aimed at protecting computer networks from various threats.

Cloud computing is understood as providing users with servers, software, databases, intellectual analysis over the Internet. All programs can be launched and display their results in the windows of usual browsers on the computer but the applications and information necessary for work are stored on remote servers. The computer equipment, performing cloud calculations, is called “cloud’. The technology increases resource flexibility, speeds up the implementation of innovations, and has high scalability, which ensures cost savings for users.

Navigine keeps up with the time and develops innovative tools that can be confidently called the elements of Industry 4.0, including such software products as Navigine SDK and Navigine Tracking which are used for realizing indoor navigation and positioning, tracking assets.

In the modern world, when the competition between companies is very high, it is important to implement various advanced technologies. The software solutions from Navigine allow you to improve the performance of your company.

A series of lectures on indoor navigation algorithms

A series of lectures on indoor navigation algorithms

09 NOV 2021 · 6 MIN
Read Article
Industries
Technology
News
Company
Company Blog
This site uses cookies. By continuing to browse the site you are agreeing to our use of cookies. Find out more here
Got It!